Our journalism class has set out to give the youth of Lincoln Park an outlet to share their stories. On March 21, 2016, our class met at the Lincoln Park Boys and Girls Club to put that plan into action. We hosted a photography workshop for the kids, mainly third- through fifth-graders. 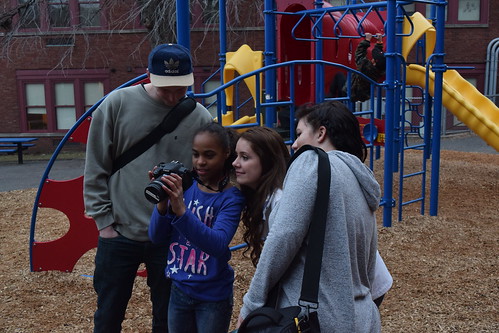 The evening began with the 12 of us, including our professor, John Hatcher, meeting in small, old room that doesn’t get much use anymore. As we tried to disregard the pounding on the door from the excited kids, we held a brief, last-minute planning session for the night.

The majority of us had brought cameras, some personally owned, others rented from University of Minnesota Duluth. After we all became savvy with the equipment, we decided that we were going to share the cameras with the kids and let them take their own photos in Lincoln Park as we guided them.

We adjourned from the small room and broke into groups of about three kids and one college student in the preteen center. The last thing we had the kids do before we went into the field was fill out a worksheet that asked them to draw and briefly write about what they liked most about Lincoln Park. Our idea was that they would then go take photos of whatever they wrote about.

Roughly twenty minutes later, our class, 15 or so kids and a couple staff members walked a block to Lincoln Park, the actual park. As we walked, the kids took pictures of anything they thought was cool. Collectively, we accumulated over 100 photos. We got excited to get some photos when we got down by the stream, but all too soon we had to make our way back to the Club.

We took a group photo with the kids back at the playground at the club and that was the unofficial end to our time with them for the evening. Our class met back in that small room and recapped the night. We all felt good about what we accomplished and planned our tasks for the week to come.

We’ll be back at the Boys and Girls Club this Monday. Our workshop topic this time will be videography.

What you can read next

In the Minds of the Youth; Our Work in Lincoln Park So Far